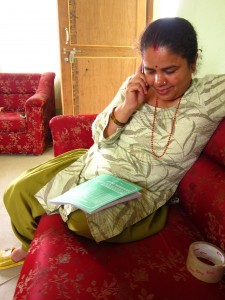 Rita berättar …. ”It has already been 8 days now from the first earthquake. Till today we feel the Shakes. We feel it more today actually than yesterday. Today too we heard the news of houses collasping down and people getting trapped in it from today’s shakes. It is very depressing to see the reports on TV of how people have suffered. Till now the death toll has crossed 7 000 says the officials. In many districts like Dhading, Nuwakot, Sindupalchowk more than 80 percent of houses has collapsed. Many are being rescued and being brought to the hospital. It’s such rush in hospital.

The foundation of BAS was built very strong and is still very strong even after the earthquake. But may be the house is in the height and the land has slope after it, the building shook more and the walls has been affected by the shake. When we examined the building to the metropolitan engineer the day before yesterday to evaluate its livable condition, he said the same that the foundation is strong so there is no risk to the building and can be livable after the repair. They have guided us to break the walls of the ground floor and re build the new wall. These walls had left its place more than 3 inches. So it should all be broken down and built a new one again. For remaining floors above that, we need to break one line of bricks where the cracks are deeper and re plaster it again and for the smaller cracks we need to apply some kind of adhesive paints/cracks.

One main problem for many people these days in the city is unavailability of workers as all of them have left the city either back to india or back to home ton. We also tried to call the construction workers but many are unavailable too. From yesterday, however we have started working on little things. There were big cracks on the floor outside the building towards the backyard of the house. Here we have already temporarily plastered the gaps so that the rain water does not enter the ground for now. Or else there will be the risk of water entering the floor making the soil loose and it might swipe away the entire backyard. Also we have started breaking down the wall of the ground floor.

The drainage and pipeline system is crushed and affected in the exterior part of the house. All the pipelines of water, drainage. electricity that has been laid inside the foundation of the house is safe and good. No big problem on this..(so far we hope) Solar power is not working. For this, we do not know what the problem is. We have not shown it to the technician yet.

We will carry on with these little steps because we want to bring back the patients before the city gets infected by epidemics all over. Epidemics is one of the biggest fear to the people right now. Till today we feel the after shakes but now the frequency is low. Still there are people staying out in the open space and hospitals are treating its patient in its ground and not in the buildings.

We are so thankful for all your support, this makes us strong to be able to carrying on – Thank you!”