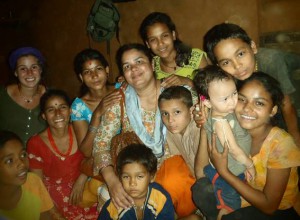 ”Thank you to every every one there for passing us the courage and strength to fight all this. It must be the prayer of everyone that we all are alive and are still managing safe. Otherwise it was not a small disaster to overcome. That saturday we got a mail from a Swedish woman who was a nurse and was in her practice in teaching hospital.  She wanted to come to bas. We met up and Rekha and I and she were talking at BAS then I suddenly felt the earthquake. We rushed as fast as electricity, shouting loud get out get out so that everyone in the BAS-shelter would get out of house. When we reached the ground floor in few seconds the compond wall had already collapsed. Everyone got out of the shelter and the ground in front of it was full of many people from the surroundings.

The shelter shook like the swing. And we could see two of the disabled children – Sanjok and Shanti – inside the window, both were looking at the ground full of people. The little girl Maya was also inside. Maya has plaster in her body down from stomach and she cannot move by her own. Everyone outside had lost thinking power of what to do, I was terrified and hopeless from the thought of children being inside. We had to do something but did not know how because the house was shaking. In some moment we formed a group of boys from the ones who had gathered on the ground to rescue Maya. When shake got less they carried Maya out of house along with the matress. Right after that they brought Shanti out, that moment it felt like house would fall down. Now it was 8 cp children left in the house. Legs could feel that something was boiling inside the earth and as if the land would tear apart and take all of us in. Shaking was there all the time. Taking 8 children out from the third floor was not easy but seeing Santi and Sanjok from the window was heart breaking to me and to all. After some time a group of young girls and boys were ready to go in. Rekha ran with them all in to the childrens room and and all of them carried all the children out of the room at once. And until then we pulled out the matress out of the beds from the nearest room to the ground and laid off children there. Finally all were out and safe.

The land kept shaking all the time. The Swedish woman was still with us. We stayed in the ground the whole day and started getting news of collapse of houses,temples, big apartments, the part of teaching hospital, hotels, the view tower dharahara and the jujuries and the deaths. The compound wall of the BAS fell down , the sewage pipeline got crushed , the water filter vessel feel down and damaged the water pipeline and the tank, tv fell off , solar batteries feĺl down. All the rooms except the top floor got crack in the wall. We were so lucky that because the BAS house has very strong foundation it did not fall. Or else if it was made like other ordinary nepali houses then we all would have died in one spot. It got cracked because it is in the height and has slope after it. Thank god that all the lifes in it got saved.

The whoe day was gloomy and then in the evening it felt like it would rain. The shake had been less then before and everyone else was preparing to spend night in the ground. But we could not do so because if it would rain then it would be worst to the children. So we took them in the open space in the ground floor in the library area and remained alert whole night to handel the big shakes and somehow passed the night. In the day we somehow managed to feed them with biscuit and water for the lunch but for the evening we could not manage any food for them. But they did not cry at aĺl. I do not know how did they cooperate with that situation – Gods play!

The next morning we thought to shift all the children and the patients who cannot care themselves to the BAS farm area. We  transported them all. There were no vehicles in the road except ambulance in the road and helucoptors in the sky. We managed to bring them to the farm doing many risky trips in the van and made temporary tents in the field for them. Children are now sleeping in a little hut we have in the field. It rained heavily the second night. All got drentched but safe. Today we transported some more food and clothes and matresses and big plastic wrapper kind of things to shield the hut from inside to avoid rain coming in to the hut where children are staying.

It is the third day today and it still feels it is shaking. Even if not everyones heart and leg is so weak that it feels the earth shaking even with the slight breeze and sound of helicoptor.
There had been snow in some part of Nepal and maybe because of that it such cool brèeze right now. Many people have left Kathmandu to go back to their home town as there is rumor of having health hazards in Kathmandu now because of dead bodies. There are hundreds of dead people in the hospitals who has not been recognized and the hospital has asked the general people to come and sèe if they have someone in their family gone missing in the earthquake. So this will take time to recognize the dead bodies and to cremate them. And the health hazards can be spread out of it and the polluted water sources. and there are landslides in high ways too.
Tonight too we are in the open ground to spent night and there are so many people here. When I am writing this to you it came big earthquake again and every one went blue. Do not know when we will get over of this. Everything is uncertain and they still say we will have more shakes…
But thank you for all the prayers and lucks…
Lots of love,
Rita
Tack för ditt bidrag – Varje krona är betydelsefull!
– Hjälp oss gärna med insamlingar -Märk betalningen med ”Jordbävning”.
Bankgiro 434-9866
Handelsbanken Kontonummer: 6757-754400522
https://www.basinsweden.org/wp-content/uploads/2013/11/logo-200x199.png 0 0 bas https://www.basinsweden.org/wp-content/uploads/2013/11/logo-200x199.png bas2015-04-27 23:29:172015-04-27 23:30:49Rita rapporterar från Kathmandu